The story of Mikki Taylor and her foster (now adoptive) family, The Silz, is a beautiful testament of resiliency, trust and faith. Together they worked through an unlikely pairing and built incredible relationships within their family and into their community. 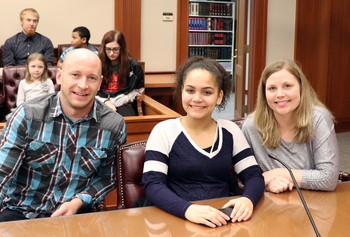 It was a risk for both the Silz family and for Mikki to allow the other into their world. Neither knew if it would work. Through perseverance, kindness, gentle boundaries and love, an unbreakable bond formed.

There are a number of myths and stereotypes surrounding foster care

Most of them concern teenagers in foster care. Of the approximately 110,000 children in foster care nationwide, almost 25% are between the ages of 12-17. In a recent piece in The Hill, Senator Chuck Grassley of Iowa, founder and co-chair of the Senate Caucus on Foster Youth, debunks four common beliefs about teens in foster care:

"Addressing these misconceptions is critical to understanding the importance of [fostering and] adoption," Grassley stated, "They want love, stability and a place to call home."

Krista Silz and her husband, Eric, always felt that God wanted them to be foster parents, to help kids in their community. They wanted to be impactful on today's youth and young adults, understanding that providing the basic needs of love, safety and guidance would take the stress off of basic survival and would allow teens to switch their focus to school, positive friendships and extra-curricular activities.

There were a lot of reasons not to foster a teen

Even with fostering experience already under their belts, Krista and Eric were still a little uncertain when Necco approached them about Mikki. At the time, they had a five-year-old son they adopted at birth and two biological daughters, ages one and four. Every child they previously fostered had been younger; they had no experience with teenagers. They were moved by the genuine need for foster parents of teenagers. With gentle encouragement from Necco and lots of prayer, they opened their home and their hearts to Mikki.

The youngest of four, Mikki came to the Silz family from a horrifically abusive childhood. She lived most of her life with two of her siblings and her father. Her mother had been only sporadically in her life. In her words, "we never had a stable home, let alone water and electricity at the same time." Her bedroom was an unfinished garage that frequently was used for her father's drug deals and other "business."

By the age of 14, Mikki hit her breaking point and courageously came forward. While it was difficult for her to leave her brother, she knew she had to break the cycle of abuse and neglect. Mikki's case manager at Necco had a feeling that Krista and Eric would be a wonderful foster family for her, and through a leap of faith Mikki agreed to try the fostering arrangement.

From the first day in their home, Krista was amazed at Mikki's gentleness with her younger children and respectful attitude. Even though she was not accustomed to having younger siblings, Mikki bonded with the little ones and, over time, with Krista and Eric. Over the next two years, Mikki became involved in Young Life, started playing softball, and developed new friendships.

Mikki was given a safe place to truly heal

As she worried less about survival and more about just being a teenager, she decided to testify against her father, which ultimately put him in prison for life.

This was a huge step in her healing process, giving her closure for her past and hope for her future. Knowing this was a good match, Krista and Eric allowed Mikki to decide whether she would like for their fostering arrangement to become permanent. The Silz adopted Mikki on February 15, 2018.

Both Krista and Mikki are acutely aware of the stereotypes surrounding fostering and adopting teenagers. Krista urges other parents who are considering fostering a teen to learn what foster care is really like and to pray about it. There are a lot of kids out there who need someone to depend on. "While it takes time, it IS rewarding.

Being a positive influence and role model as well as giving them a stable family environment is the chance they need. They are not bad kids," she says. Mikki takes the pressure off even more saying, "If parents would give a chance to a foster teenager, they would not regret it. We basically fend for ourselves. Teens just need a real parent figure. [The key] to fostering a teen is you have to learn to understand why they are how they are."

Everyone can change, and every kid deserves a chance. This is the power behind this adoption story. Kids are incredibly resilient; they just need a little love and stability in which to thrive.