Janet Siemer is the youngest of eleven children. Although she had no children of her own, Janet’s 35 nieces and nephews helped make her really great at caring and nurturing other people’s children. In 2011, a friend planted the seed in Janet’s head that she should become a foster parent. A short time after, a second person made the same comment to her. Janet, a nurse, read an article about a NICU nurse who attended to an increasing number of babies born addicted to heroin.

Janet thought to herself, “If she can do it, I can do it.”

After learning more about the process and requirements, Janet joined a training group of other foster parents in the Cincinnati area. Together, they would learn how to best support and care for children in foster care. Because Necco dually licenses our foster parents for foster care and adoption, Janet had a head start if she decided to foster to adopt a child.

Janet became a licensed foster parent, and almost immediately began fostering children. But nearly two years later, she received a call from Necco that would change her life.

Landen, a 7 week old infant was born addicted to heroin. After nearly two months of a grueling detoxification, he was finally ready to move from the hospital NICU into a family.

Shortly after getting Landen settled and establishing a routine with a newborn, Janet received another call from Necco. This time it was for 10 day old Makayla, also born addicted to heroin.

Janet just couldn’t take on another infant. She and Landen were settled into a routine and adding another baby would be too much for the single foster mother.

Janet had to tell the Necco Home Resource Coordinator no.

A few days had passed and Makayla was still living in a plastic hospital bassinet without a home or a family to go to. Necco reached out once again to Janet. 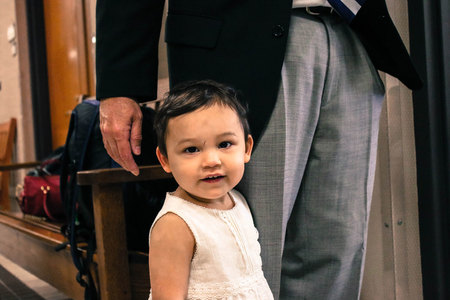 "I went from being a single person to a single mom of two newborns."

It was just like having twins. People would ask if they were twins and I would just tell them ‘yes’. It was easier that way.” Janet says she most enjoys seeing the two toddlers grow up together as siblings even though they are not related. “Makayla follows everything Landon does, she is attached to him.”

Even if Janet were not able to adopt, she said she would still foster, offering this advice to anyone considering fostering:

“I would encourage them to talk to foster parents, real folks who are doing it. It is very rewarding. If you are thinking about the need and that you can help, let us know so we can help you make it happen. If you have it in your heart, ask the questions, contact Necco and get the info.”

On September 11, 2017, with her family by her side, Janet legally adopted Landen and Makayla. To her, it was a formality. In her heart, they have always been her babies.

When asked what big plans she had after leaving the courthouse that day, Janet responded in true mommy fashion: “They will be hungry so we will grab some lunch. Then it will be their naptime.”