Rickey Henderson holds the record for most leadoff home runs of anyone in baseball history. Rickey just so happens to be Greg Thompson’s all-time favorite athlete, and while Rickey was known for starting things off right (and stealing bases of course!), Greg’s life began in the exact opposite fashion.

Greg’s humble beginnings in Kenova, WV, were spent fatherless, and with a mother who was neglectful as well as physically and emotionally abusive. Greg’s childhood home had no telephone, a frequent absence of hot water and heat in the winter, and a hole with a twelve-foot circumference in the ceiling that allowed rain to cascade down the walls. His childhood is comparable to many of Necco’s placement referrals. Soon after Greg’s 18th birthday, his mother kicked him out with orders never to return. With nowhere to go, Greg spent a few nights sleeping outside his old high school gym. He was officially homeless. His biggest worry was his Presidential Scholarship to Marshall University. He was terrified he wouldn’t be able to accept it since he didn’t have the means to get to campus. However, as you may have already surmised from the leadoff sentence to this article, this isn’t a story about homelessness, it’s a story about home runs.

The first real home run hitter to enter Greg’s life was a man named Mark Cisco. Greg met Mark in middle school and, knowing his homelife, Mark provided Greg many of the necessities his mother was unable or unwilling to provide. Mark was the owner and founder of Key Player, a regional basketball school, who also had his own clothing line. He not only provided Greg a place to play basketball when finances would have been an insurmountable hurdle, but also a wardrobe that otherwise would have come entirely from donations. However, Greg says the most important thing Mark did for him was to instill a sense of duty, honor, and respect that resonates in everything he attempts in life. When Greg got a little older, Mark even provided Greg with a job, cleaning and performing maintenance tasks at his gym. During his college years, Mark again put in a good word for Greg and helped him get a job working for the City of Kenova government, eventually as the court clerk and mayor’s assistant.

Mark’s kindness came from a life philosophy he held based on paying it forward. This was years before Kevin Spacey and Helen Hunt’s movie was released about the mantra. Pay it Forward was not just a philosophy Greg could get behind, but a life goal he could embrace whole-heartedly.

One of the ways Greg “paid it forward” was by volunteering at Mark’s basketball school. Little did he know he would have an opportunity to not only pay it forward by making a difference in a child’s life, but he would also make a lifelong friend who he now considers a brother. This person was Chris Early.

In the same way Mark mentored him, Greg now had the chance to do so for Chris. When they met, Chris was struggling in school and wasn’t allowed to play basketball due to his grades. Greg tutored him and signed him up for basketball camp. Down the road the two grew inseparable, and when Chris needed an agent to represent his professional basketball career, he chose Greg. After his basketball career ended Chris came to Necco and worked alongside Greg.

One of Greg’s earliest memories is that of a kindergarten classroom assignment to illustrate his future career. While most children in his class drew firemen, policemen, athletes and teachers, Greg drew a man in a suit with a briefcase. He announced to the class that he wanted to be a lawyer. Mark’s pay it forward philosophy only furthered Greg’s desire to study and eventually practice law in order to help the less fortunate who can barely help themselves in their day-to-day lives much less in a court of law.

The next power hitter was his grandmother, affectionately known by everyone as “The G-Maw”. She’s the type to bat cleanup in this proverbial lineup of long ballers. When she heard that Greg was sleeping outside his high school gym, she wouldn’t have it. She picked him up, took him to her home, and gave him a bed to sleep in. Greg’s grandmother wasn’t exactly well off financially, but she had a big heart and wanted to do everything she could to help children in need, especially her own grandchild.

Grandma Shepherd already had a crowded home, she was a foster mother for teenage boys in Huntington, and during Greg’s first year of undergrad at Marshall University he slept atop a bunk bed that he shared with one of his foster brothers. He couldn’t know it at the time, but it was a foreshadowing of his future career path. This was the first time in his life where Greg could fully focus on his studies and not worry about where his next meal would come from.

He says he will likely never be as selfless as his kind, sweet, and loving grandmother, but he will work every day to honor her legacy as a giver of care to those that need it most, and a builder of families and futures.

While Greg was pursuing his graduate education at Marshall, he found his calling with Necco. While he didn’t realize Necco was his future yet, he knew it would be helping children in need one way or another. Unfortunately, with this clarity, another curveball was thrown his way. In 2008, just after he learned of his acceptance to the University of Louisville Brandeis School of Law, his grandmother told him and his foster brothers they had thirty days to leave the only place they had ever felt safe. Their home had been foreclosed. As they carried their belongings out the door, Greg told them all that he’d buy the house back one day. He certainly didn’t have the means to do so then, and he barely even believed himself, but he says it felt like the right thing to say in the moment.

Upon finishing law school and passing the bar in 2011, Greg returned home to Huntington and to Necco. Within a year, aided by the help of friends and family, Greg and his brother, Arkell Bruce, another Necco teammate, closed on their first home purchase. It was the same home he had promised his grandmother and foster brothers that he’d buy back for the family. While his grandma didn’t move back into the home, the pride she felt for Greg was obvious. He had delivered on even his most grandiose promise.

If Mark is leading off, and The G-Maw is batting cleanup, I guess Greg will have to bat in the three hole. I’m sure Greg would be ok with that since the spot was routinely occupied by Frank Thomas, another favorite ballplayer of Greg’s.

While Greg drew support and inspiration from the first two people mentioned, he really has himself to blame for where he is today. Necco’s slogan is “We Build Families”, and Greg has taken it to heart. Not only has he had a hand in cementing foundations for numerous families to be built through foster care and adoption, but all the while Greg has been working on building his own family. If you talk to people who have worked with Greg for years, one common theme is brotherhood. I have heard Greg described as a brother on numerous occasions by the top tier of leadership at Necco. Obviously, the word brotherhood is important to Greg not just because it’s an opportunity to strengthen bonds with his colleagues, but because of his lack of familial support growing up.

Rob Goodwin, Chief People Officer, is one person who describes Greg as a brother. When asked about Greg, Rob said, “When I think of the word ‘execution’ I think of Greg Thompson. Greg has a deep understanding of our corporate culture principles and realizes the difference between knowing and living them.”

That’s the key isn’t it? Don’t just recite a mantra or slogan; live it. Greg has lived “Pay It Forward” by forging an incredible friendship with Chris Early and through all the other children he has helped. He has lived “We Build Families” by not only working to piece together families through Necco, but by piecing together his own family inside the company. Now, as he transitions his career to Independent Living, their slogan is “We Build Futures”, and Greg has begun living that as well. He is looking ahead more than ever, due to the nature of his new role, and he is thinking about the future paths for each young adult in his program. Finally, he has lived to honor his grandmother’s way of life; helping children in need regardless of means or anything else.

Greg wrote in his Personal Statement that he included with his law school application, “Throughout my academic and professional career, I have demonstrated the ability to consistently produce quality results regardless of my circumstances.” His meteoric rise through the ranks at Necco proves that quote to be an understatement. Greg has earned a bevy of awards during his time with the company and, more importantly, he has positively impacted the lives of countless children.

Greg first came to Necco in 2005 after earning his B.A from Marshall University in Political Science. The fit was perfect. Not only was Necco the outlet for helping children and young adults in need that Greg craved, but it also offered the flexibility for Greg to continue his education. Greg worked in our South Point, OH office while working on his M.A. and then, when it came time for law school Greg was able to continue working with Necco part-time and during the summers in our Grayson, Louisville, Huntington and Elizabethtown offices. Having the opportunity to not only see how different offices were run, but also experience some of the different legal obstacles in each state, gave Greg a strong background to catapult his career with Necco. He was primarily doing Case Management work, but he was building a large background knowledge, and his versatility was apparent.

Upon completing law school, Greg moved back to Huntington and started working in the office full time. This is when his career trajectory truly started flourishing. Within two years he was offered, and accepted, the Program Director of Foster Care job in South Point, OH. Just 18 months after that he was promoted to Ohio Executive State Director. As State Director, Greg oversaw all Necco Ohio’s service lines, including Residential and Independent Living. This gave him the opportunity to work with older children that he could connect with on a deeper level. After running all things Necco Ohio for five plus years, Greg became the first Vice President of Independent Living. He now oversees an Independent Living Program that is committed to Building Futures and is growing rapidly. The young adults he cares for in Independent Living remind him of Chris, and of himself. 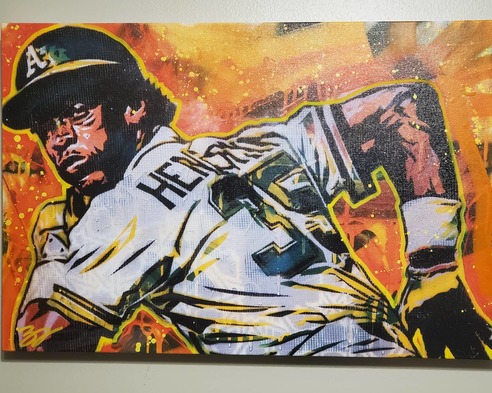 I began this article with a stat about Rickey Henderson. While Rickey holds several impressive all-time marks for MLB players, he is most famous for his individualism. Rickey was an entertainer. He talked to himself. He talked to opponents. Often Rickey was Rickey’s fiercest competition on the field. He was unique. Those characteristics allowed him to transcend the sport in a way few ever can.

Greg tries not to compare himself to others, and in that way, like Rickey, he is his own toughest competition. Greg has said he is constantly trying to become a better version of himself. While Greg hasn’t been caught talking to himself just yet, he embodies a lot of the other qualities Henderson possessed. Particularly that unmatched determination to be the best version of himself, and that brash individualistic personality. Those key traits are how the hometown hero from Huntington went from homeless to home run.